Uncovering the hidden potential of passing networks through interactive visualizations.

Passing networks today are presented as static images, which leads to important insights being lost. By unlocking the added dimension of interactivity, and by critically thinking about the metrics they encode, we can make passing networks much more valuable for tactical analysis. Click here to jump straight to the interactive passing networks!

A team "without soul or joy"

Passing is undoubtedly one of the most important components of any football team's play, but it's often oversimplified during match analysis. Take, for example, Spain's loss to Russia in the 2018 World Cup Round of 16. Spain completed over 1,000 passes and had 74% of the ball, yet they could only manage to force in an own goal from a set piece in 120 minutes. Spanish newspaper Marca called their own national team one "without soul or joy", while also rightly pinpointing their "sterile domination" in the Russia game.

So how does one go about debugging this sterile domination? Where did it go wrong for Spain? Why couldn't more than 1,000 passes generate more than just one (own) goal? If you were to play Spain tomorrow, how would you set up against them to ensure their domination remains ineffective? How should you train in preparation to play Spain? And if you're Spain, what do you need to do differently on the training ground?

These are the types of questions that analysts are often faced with, and I'd like you to put yourself in their shoes for the rest of this post. Note that analysts at professional clubs will have to answer such questions for not just their own team, but also their upcoming opposition, by looking at weeks' if not months' worth of matches, all before their team starts training for the match on the weekend.

The state of passing networks

Passing networks, while not common in the mainstream media yet, are a popular visualization amongst football analysts that are used to study a team's passing patterns in a particular match. They're called 'networks' because they fundamentally represent mathematical networks; a passing network consists of a set of 'nodes' (i.e. players) that are connected to each other through 'edges' (i.e. passes). Networks are incredibly useful across several domains, since many real-world environments can be modelled as networks. For example, while studying social networks, nodes could represent users and edges could represent the number of times they've messaged each other. Or, while solving problems in the transportation domain, traffic intersections could be modelled as nodes, and the roads connecting them could be modelled as the edges.

Sounds useful — can Spain's passing network against Russia tell us anything about why they were so ineffective with the ball? Here's an auto-generated passing network from the Twitter account, @11tegen11: 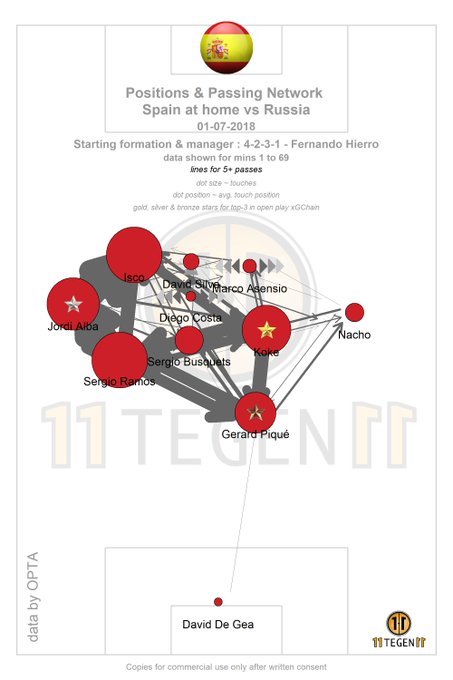 There's a lot going on here, so here is a breakdown of the elements that make up this visualization:

Even after an explanation, this is an overwhelming visualization packed with so much information that it is quite ineffective. From a design perspective, with a static image, there's an inherent trade-off between representing more information and reducing visual clutter.

Note: yes, this particular passing network is an anomaly in that it is especially cluttered, but to me it represents larger problems with the way passing networks are usually presented, which I'll explain below.


To help us out a bit, shown above is Spain's passing network with a few key design differences. You might find this version easier to digest, and you can start to notice some patterns:

Note: throughout this post, Spain's passing networks against Russia take into account play up until the 66th minute, which is when Spain made their first change. Dealing with player changes is hard for passing networks, and definitely one of their limitations.

Here's a summary of the design differences, along with justifications for each decision:

A picture is worth a thousand passes?

If this is your first time seeing passing networks, you are hopefully fascinated by them. They are indeed a neat tool to concisely visualize a team's shape and get a basic sense of their passing channels over the course of a match. However, when you start looking at these from the point of view of a tactical analyst, the utility of passing networks maxes out very quickly.

The insights that you can draw from this single image are very limited. In fact, the insights listed above are insights that any spectator who's paying attention to the match would be able to pinpoint with ease. Surely we can do better when we have more than 1,000 pass data points, each of which has several attributes?

Focusing on the user

Once we start to narrow down the scope of our new passing networks, we start to break free from some of the limiting constraints and have more room to experiment. If we intend to create passing networks that are more useful to fans and professionals looking for tactical insights, what kind of questions should the visualization be able to answer? Imagine yourself in your favourite team's manager's shoes, trying to figure out how your team should act without the ball in your next match. What would you like to know about your opponents that would help you prepare for the game?

By no means is this a definitive list, but here are some questions that would (potentially) be useful to answer:

This is already a list of very varied questions, and it is far from being comprehensive. Every team, based on their own strengths and weaknesses, might want to know the answers to a different set of questions. However, one common thread ties these questions together: they are all related to how the opponents act when they have the ball, which means that a lot of the answers are encoded in their passing behaviour.

Not all passes are created equal

Uncovering the insights that could answer these questions requires us to carefully think about the anatomy of a single pass. Each pass has some attributes associated to it: for example, its start and end locations on the pitch, the players involved, and its length, duration, angle, height, among other properties. The typical passing network (reproduced below) treats every pass as being equal. Each pass, regardless of its nature, contributes evenly to this visualization.

This is not to say that this visualization is useless; in fact, for the most general use case of presenting data on a Twitter feed, this is perfect. It is intuitive (thickness of line = number of passes), and can even answer some questions such as "which of their players sees the most of the ball?" which in turn might lend some insight into who you should man-mark to disrupt their usual passing flow.

However, we want to be able to answer more than just that one question if we want to really enable in-depth tactical analysis. In the original passing network, one can think of each pass (regardless of its attributes) as carrying a value of 1. Things start to get very interesting when we change the value of passes based on their attributes, in a way that highlights the answers to our questions. We suddenly start to uncover hidden patterns that a single image just isn't able to capture.

Given a particular question we would like to answer about a team's behaviour with the ball, we can come up with a weighting scheme that values certain passes higher than others, such that our desired patterns are highlighted.


Passing networks are a flexible tool

Clearly, passing networks provide an easy-to-modify framework that can be used to gain insights into several tactical questions, by simply encoding the relevant metrics in the pass weights. The questions (and corresponding pass weighting schemes) I proposed above are a small subset of the questions that an analyst might want to answer. There is a whole universe of questions that one might ask about how a team behaves with the ball, but the concept of a passing network is so powerful that you can uncover many of these answers by tweaking the encoded metrics.

There are two main requirements for this new type of passing network visualization:

Here is a first attempt at packaging different insights in the form of an interactive tool that can be used for in-depth passing network analysis. Use the tabs to switch between pass weighting metrics, and use the slider to control the degree of weighting.

Included below are the interactive passing networks for England's near perfect 2-0 World Cup quarter-final win against Sweden, and Germany's wretched 1-0 group stage loss to Mexico. Feel free to play around with these widgets, and let me know if you're interested in seeing particular teams or matches!

A team "without soul or joy" without a Plan B

Back to our original question, all the evidence points to Spain's Plan A being neutralized by Russia. Spain were allowed to play their tiki-taka triangles on the left, but they were unable to exploit spaces as they normally do through switches in play and shifting the ball centrally. Russia were able to starve David Silva and Diego Costa of the ball by cutting off the passing channels to them, forcing Spain to play innocuous passes amongst the trio of Alba, Isco and Ramos. When they did find themselves in potentially threatening positions between the lines, Russia's compact defence cut out their options and forced backward passes to the likes of Koke and Ramos, who, devoid of creativity and attacking options, resorted to passing the ball sideways. Spain, without an obvious Plan B, deserved to be knocked out.

I'm yet to set up a comments section for this blog, but I would love to hear any thoughts or feedback you might have. Please email me at karun.singh17@gmail.com or message me on Twitter at @karun1710!